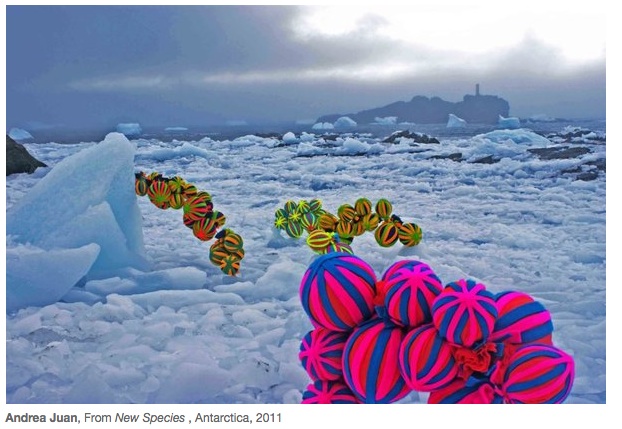 The artist’s new series of work is based on her interest in the continued scientific research on climate change. Following the meltdown of ice shelves which caused important changes in glaciers in the Antarctic Peninsula, an extraordinary wealth of new specimens has been found. An unknown world of possibilities and new life has emerged and it is the core of the series New Species (2011). The striking images depict the newly discovered ecosystem that had remained unnoticed under the ice in playful scenes where gleaming shapes take over the immeasurable setting.

This series also sparked the latest site-specific project which is titled New Eden (2012). This performance/installation took place in Antarctica last January and February. Large pieces of mesh in neon colors flow over large expanses of ice without touching the ground. The translucent material casts diaphanous shadows on highly reflective areas which become covered with pink and orange light. Like soft and delicate living organisms, the sheer net moves between the shapes of ice blocks in the land and clouds in the sky, while changing the perception of an otherwise frosty landscape.

Andrea Juan was born in Buenos Aires in 1964. She is a multimedia artist working mainly with photography, digital video, graphic arts and installations. Juan is a recipient of the John Simon Guggenheim Memorial Foundation fellowship (USA), UNESCO Awards (France) and many other awards.

This is my next favourite work of hers. Antarctica Project 2008/2010. The Invisible Forest

The series shows different settings with mannequins of cloth on a human scale, and replicas to macroscopic size of tiny algae (marine phytoplankton). The works propose return to look like pure beings in harmonic connection with our environment.

“Have you seen an invisible forest? In the ocean, the invisible forest marine phytoplankton plays a critical role in regulating Earth’s climate. Every drop of water within 100 meters of the ocean contains thousands of free-floating microscopic plants called phytoplankton. Explore how human activities can alter the impact of phytoplankton in the carbon cycle on the planet, is crucial for predicting long-term ecological effects.”