It’s the last day of August and therefore in Canada some of us have autumn, the winter, then snow on our minds but also are squeezing the last summer out of summer.  One more watermelon.

We are hard at work completing the Antarctic Book of Cooking and Cleaning to get to you as soon as we can. But still, we pause to share with you a little story of watermelon snow; a bridge between these summer and winter icons.

I first heard of watermelon snow in Antarctica.

Pink/red snow was a mystery for ages, a misunderstood phenomena.  Watermelon snow appears at high elevations in spring or summer.  It is caused by concentrations or “blooms” of microscopic algae.   It is said to also smell like watermelon, imagine that. In Scandanavia some call it ‘blood snow’. 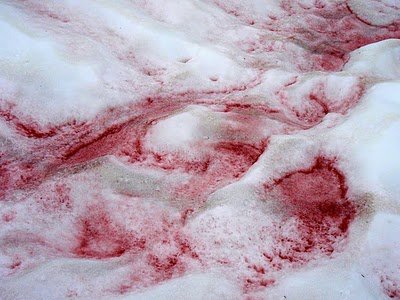 Where Wendy and I were at Russia’s Bellingshausen research station was the fraction of ice-free land of King George Island on the Fildes Peninsula. There were active glaciology studies while we were there in summer.  Scientists would also study the pretty snow near the Weddell Sea, Antarctica, reporting in Astrobiology Journal findings such as “spectroscopy of senescing snow algae: pigmentation changes in an Antarctic cold desert extremophile.”

Every day I learn new verbs, terms and things about Antarctica.  Senescing is reaching maturity. And astrobiologists compare green and red algae for “possible bio-markers for spectral detection on extraterrestrial icy moons and planets.” (British Antarctic Survey). I am dismayed knowing that the glaciers on the Antarctic Peninsula are retreating rapidly.

If you looked in a microscope of watermelon snow, this is what you might see (thanks Dr Frank Lang, host of Nature Notes on Jefferson Public Radio).

tiny microscopic algal cells, most likely the resting cells of Chlamydomonas nivalis, the snow algae, although it could be one of several other related genera. The single, green, cup-shaped chloroplasts of individual cells are masked by the presence of red pigments. It is the collective presence of these tiny plants that give the snow its color.

These cryophilic, that is, cold-loving algae, carry out their lives and loves in the chilly water-filled spaces among ice crystals in melting snow. It is in these chilly waters that resting cells germinate, producing flagellated cells that swim about, reproducing asexually until motile gametes or asexual resting cells are formed. Gametes unite and zygotic resting cells develop. There is no heat generated by love or sex in these creatures…Algae’s own photosynthesis provides for their energy needs and that of other organisms in a snowbound ecosystem.

Explorer Captain James Ross sailing to Greenland and the Canadian Arctic was baffled by the snow.  The London Times, Dec. 4, 1818 reported:

“Captain Sir John Ross has brought from Baffin’s Bay a quantity of red snow, or rather snow-water, which has been submitted to chymical analysis in this country, in order to the discovery of the nature of its colouring matter.” 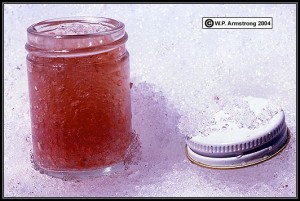 More than once in Antarctica would local snow or ice be put into a drink.

There is no watermelon snow marguerita in our Antarctic Book of Cooking and Cleaning but if there were Wendy would put a delicious spin on it.  Stay tuned to see what Antarctic beverages, cultural, science and historical tidbits you will find. 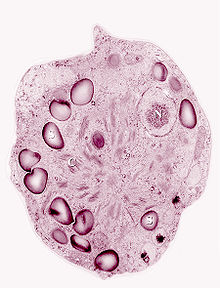 Wendy’s home smells great when Sandy and I walk in the door after our drive from Toronto. There she is in the kitchen busy prepping for the summer shoot.  Wendy had already made three beautiful and different fruit nut rings that were ready on her dining room table.  I knew I’d have to wait until after the shoot to taste any of them. I think her son and the neighbourhood mobilizes too for some goodies when it’s an Antarctic Book of Cooking & Cleaning shoot week.

Wendy said she wanted to wrap one up of the fruit nut rings for us to take back to our designer and team, The Office of Gilbert Li.  Gilbert admitted he knows the perfect microwave time now to warm up her bread and baked goods. 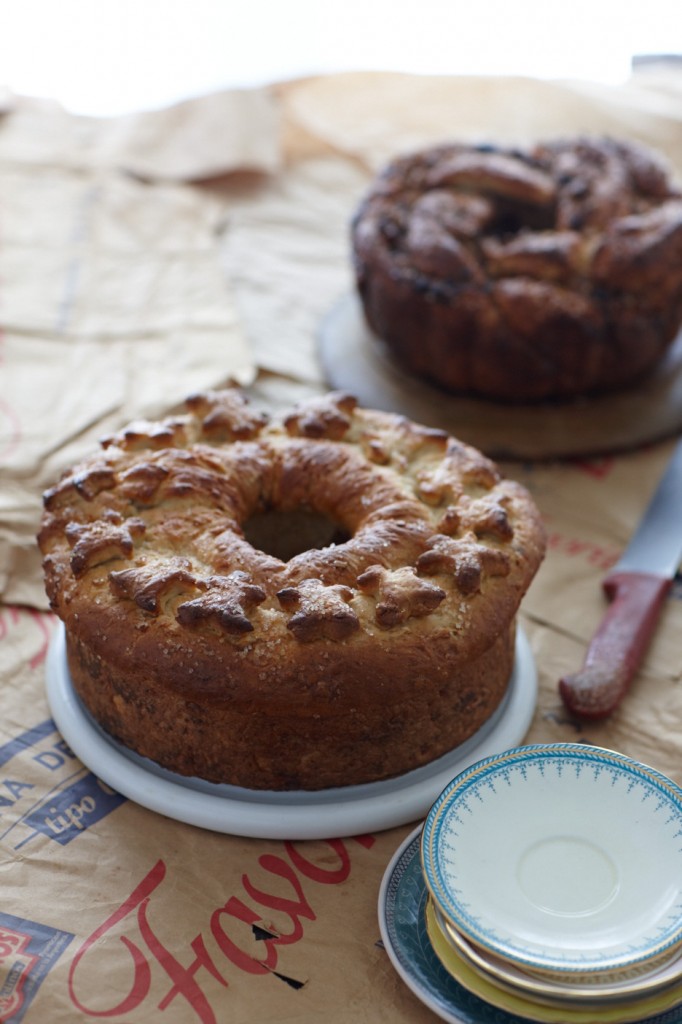 Today was also a lamb ribs shoot and a few other recipes we shot indoors and out.

How different Wendy, Cam and Fin’s big backyard looked without the snow. Green and lush. There next to Wendy’s studio was a wild rabbit hopping about as Sandy prepped for shooting the gorgeous purple cabbage dish. 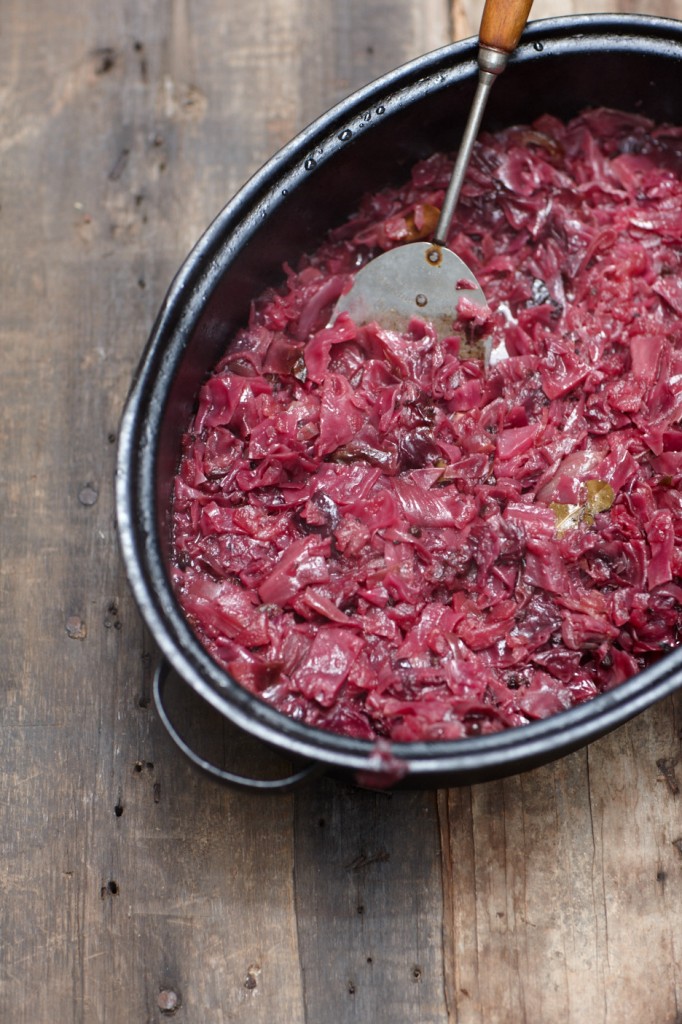 I’m amazed sometimes that in the Antarctica Wendy made meals like this with ribs, green beans, stuffed onions with apricots, fresh bread and braised cabbage. The wine was of course Argentinean.  The dessert: well I can’t give it all away. Wendy shows what you can do pretty much anywhere, depending on determination and ingredients.  Sharing and trying new recipes from others was only one of her diplomatic coups.  Here’s a sneak peek with some photo outtakes.

Another highlight of this shoot was photographing items from Wendy’s treasure trove: expedition badges and stamps, her original day plans, handwritten recipes she collected from other bases including South-American Humitas and from volunteers such as BBQ Port Tenderloin from volunteer Fred from Anchorage Alaska.

In another project I am working on we are looking at the power of touch therapy–that is physically holding objects from one’s past or from a context one is familiar. Museums in the UK, Canada, Japan, China and now Africa promote the value of touch and object handling. All this is possible when you have meaningful things to hold such as the many diverse items and international gifts Wendy carried. Those gifts she left behind she did so mindfully.  I love the items our Russians friends created and gave us, especially the envelope for our expedition. 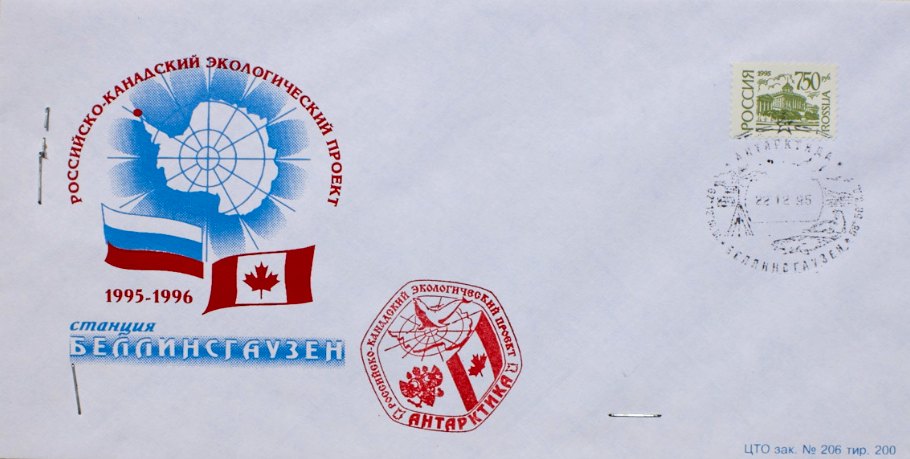 Wendy has a lovely old suitcase filled with items she collected brought back from King George Island. From it we took a large piece of craft paper, the original flour bag from Argentina and used it in the fruit nut ring shoot. 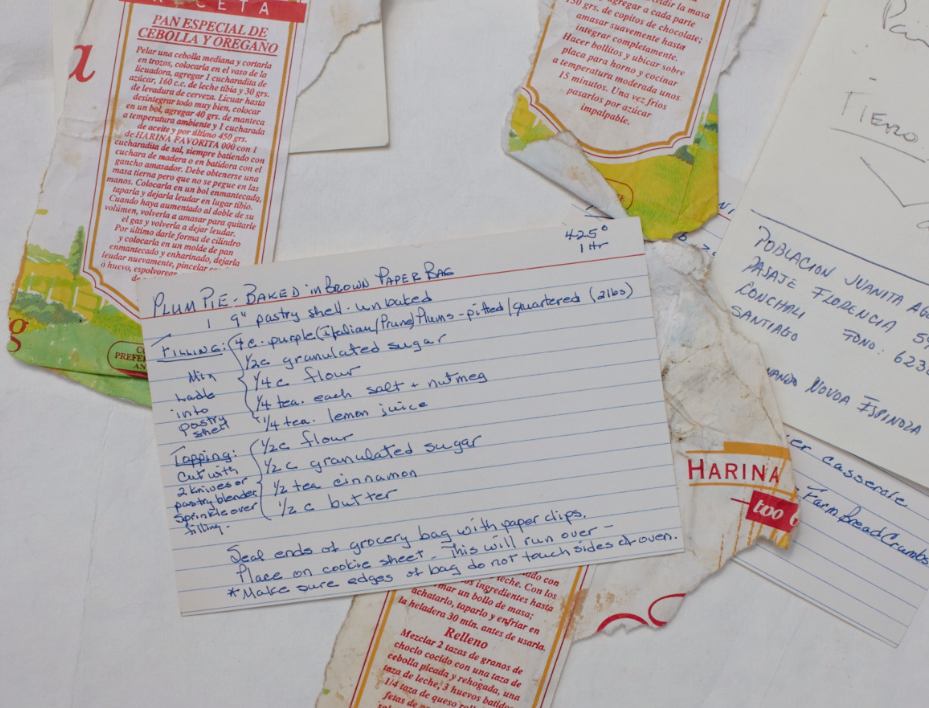 I’m going to miss this part of the book-making as we wrap up. Food conjures memories.  It’s wonderful being with Wendy as she shares with us about how she learned about or prepared a Goulash dish and with whom she ate it that night at the bottom of the world.  We discuss and reminisce about the meaning and challenges of the work back then and its significance now. Fundamentals like people who seemed to really get the most out of the experience of hand-picking garbage in the Antarctic saw the importance in small things and didn’t expect green salad each meal.

There will be more shared meals I can foresee, for one reason or another, and likely with an Antarctic dish or two. I made Wendy’s honey oatmeal bread in Australia in July and it was a huge hit. You don’t get that recipe, yet.

For more recipes, expedition stories, Antarctic cultural history and tips on cooking and cleaning, please stay tuned for our upcoming Antarctic Book of Cooking & Cleaning.  Many thanks to those already supporting us.