On the weekend our family saw this great movie Revolution by Canadian filmmaker Rob Stewart, creator of another awesome scary-inspiring film, Sharkwater.  Go see it! Encourage schools too, it also includes an education guide. 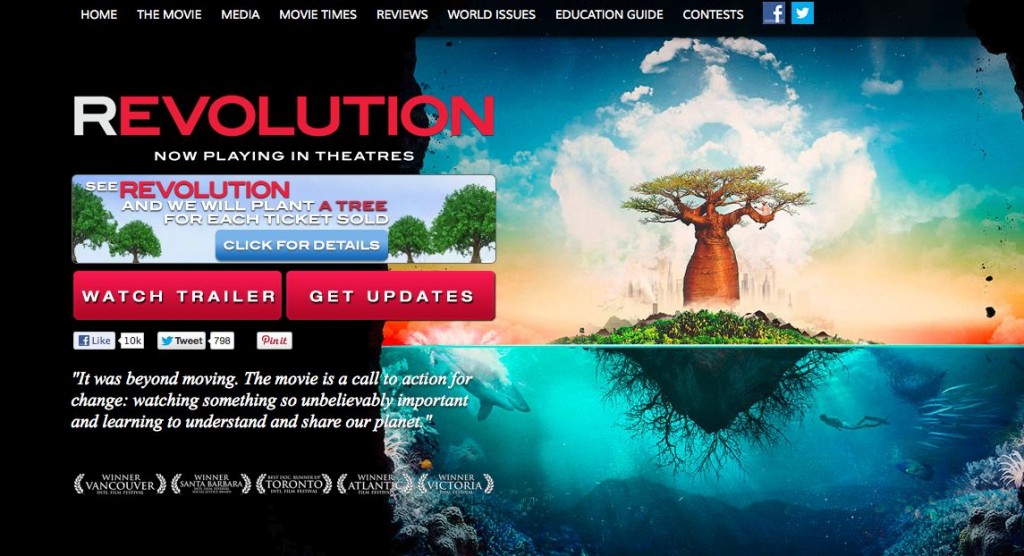 Our family thinks of Earth Day as a reminder to kick our own butts to be the change we want to see. Figuratively kicking other butts, like those of major companies (more powerful and richer than many countries), policymakers and politicians, is also our imperative. Through democratic, diplomatic, innovative, peaceful and insistent means we want to do more.

We’ve already made new commitments about forming a Toronto biodiesel (vegetable fuel) group (contact me if interested other Toronto diesel car owners!), using the car less, and we changed one habit yesterday on the spot, invigorated and reminded our actions count. We planted three trees this weekend.

In the film one young student on the island of Saipan who helped get their government to ban shark fin soup said we have to revolt (peacefully against the status quo for the future of our planet). Another thinker in the U.S. reminded us that change and changemakers make us feel  ‘uncomfortable’. So I want to be uncomfortable physically and professionally.

Rob’s is a frightening story of our planet, but also an inspiring hopeful call. Through beautiful rare footage and interviews, he illustrates how we’ve evolved so we can take hard note of how we must evolve, in the way we can consciously, through choices and voting with our pockets and hearts for the long-term not short-term or profit as the end goal.  Rob’s underwater shots are fantastic images and records of several nearly-extinct or endangered species. Our favourite shots are of the pygmy seahorse, lemurs, lynx and manta rays.

A key issue overarching the plight of sharks or land-based climate change is ocean acidification. This is one of the hugest and possibly less known threat to humankind, related to food security and thus all security. It is caused by the uptake of anthropogenic carbon dioxide (CO2) from the atmosphere (Caldeira, K.; Wickett, M. E. (2003). “Anthropogenic carbon and ocean pH”. Nature 425), killing reefs, destroying the food chain etc. 80% of Earth’s Life is in the oceans, Rob reminds us. We have a lot to answer for as consumers as do our governments (whom we elect in countries where we’re fortunate to vote and be able to participate in civic processes).

“Save the Humans” is a Revolution movie tagline

Our nine-year old daughter was most disturbed with Canada’s dismal environmental leadership record and how we’re constantly failing our country people and the part of the world here, especially in the tar sands. The prognosis for Canada and the world is dismal this film clearly states, but what choice is there but to save ourselves. There is time.

Like all other days to raise awareness and action on AIDS, water, poverty, women, Antarctica etc, every day is earth day. Happy Earth Days from The Antarctic Book of Cooking and Cleaning.