Writing worth reading in The Browser 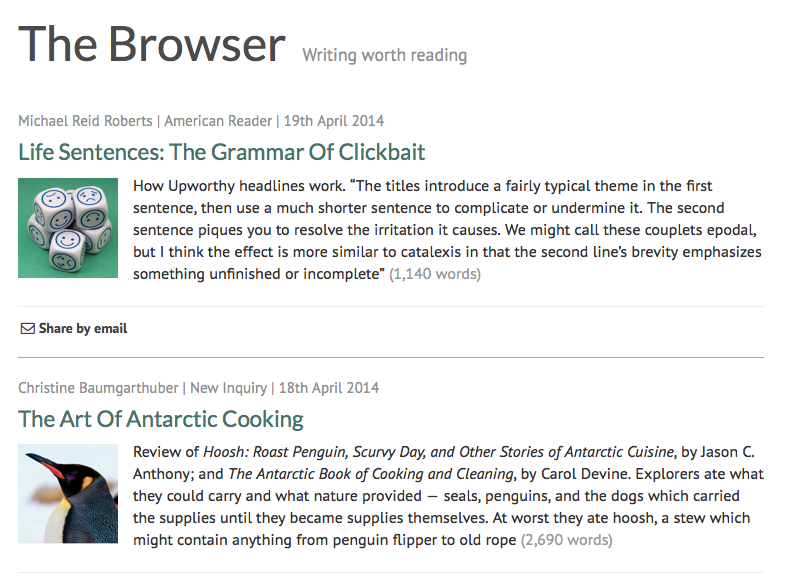 The Browser self describes:

The Browser – Writing worth reading

Links to the best recent writing for the intelligent general reader. The most influential small website on the internet.

The Art of Antarctic Cooking: review The New Inquiry

A wonderful article The Art of Antarctic Cooking by Christine Baumgarthuber is in The New Inquiry featuring The Antarctic Book of Cooking and Cleaning reviewed with Jason Anthony’s Hoosh. Thank you Adrian Chen for finding us before the book was out! 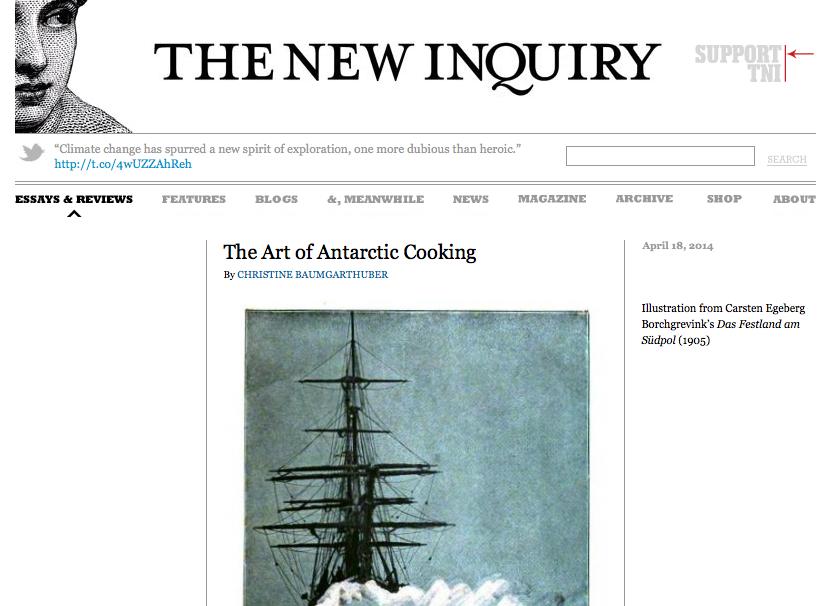 “In 1996, Canadians Trusler and Devine journeyed with several groups of volunteers to a small island 120 kilometers off the Antarctic coast to cleanse it of 28 years’ worth of accumulated garbage. Hence the book’s title. The book itself may be variously describe as a cookbook, a diary, a photo-journal, and tribute to those early explorers who survived on penguin and dog-paw stew…

Devine tells an inspiring story. “I wanted to do something previously untried,” she writes of organizing the expedition. Together with a company that “took adventurers to the Antarctic,” she established the Volunteer International Environment Work foundation and lead a trip to clean out debris and scientific equipment at the Henryk Arctowski station in the South Shetland Islands. Not long after, she set up a second expedition, Project Antarctica II. Larger than the first, this project was plagued by provisioning fiascoes, cultural misunderstandings, logistical difficulties, and rotten weather. “We knew what we’d face couldn’t be anything as serious or tough as the challenges endured by old-school Antarctic explorers,” Devine writes, “but despite understanding scurvy and having the benefit of modern communication, technology and flights to the Antarctic, the variables were many.”

One constant among the variables was Wendy Trusler, whom Devine hired to be the expedition’s cook. As ingenious and stalwart as her Antarctic forebears, Trusler recounts the joys and hardships of kitchen management at the end of the earth.

…The cook, however good or bad, is an artist whose simple vocation is to make others lives happier,” observed chef Raymond Oliver. More magician than artist, a cook with an Antarctic expedition ranked as one of its most important members…

Her skills honed in the “bush camps across Canada,” Trusler subscribes to the school of “pitch-and-toss cookery,” in which scarce ingredients force instinct and imagination to commingle in a sort of culinary gestalt. She takes the same approach to the recipes in The Antarctic Book of Cooking and Cleaning. “You’ll find these recipes are written in an idiosyncratic style,” she writes, “but I hope they’ll encourage you to taste, look for visual clues and develop a real feel for whatever you are preparing.”

Trusler’s recipes are a charming mix of her own idiosyncratic concoctions and recipes cherished and shared by her fellow activists. There’s “Maxim’s Moonshine,” a potent liquor of yeast, sugar, and water. Trusler got the recipe from a Russian glaciologist who warned that “it is … absolutely disgusting stuff, which may be consumed at an Antarctic station when nothing else is available.” Maxim also supplied an equally dubious recipe for a mixture of kelp, onion, garlic, and mayonnaise he called sea cabbage salad. Trusler juxtaposes these concoctions with  more appetizing offerings such as mulled wine, rosemary maple borscht, rosemary-encrusted lamb ribs, custard with fruit compote, cranberry fool, and cheese fondue. (This last dish moved one volunteer to opine, “If Wendy had been along, Scott would have made it.”) Containing some the most tempting expedition cuisine I’ve seen, The Antarctic Book of Cooking and Cleaning is a must-buy for eco-conscious foodies.

Both Anthony’s Hoosh and Devine and Trusler’s The Antarctic Book of Cooking and Cleaning illustrate the extent to which food nourishes the spirit as well as the body… The Antarctic Book of Cooking and Cleaning is an enjoyable glimpse into a noble endeavor undertaken in the closing years of the last century, when there still were places that seemed cut off from the rest of the world. 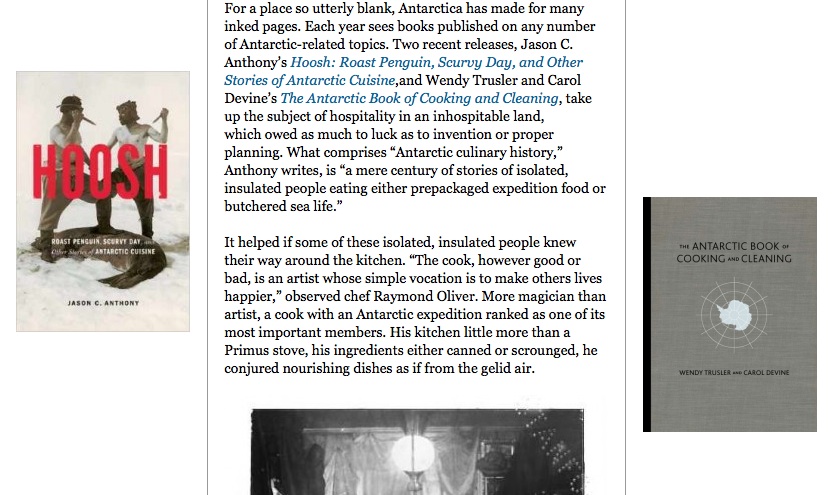 About the writer: Christine Baumgarthuber holds a doctorate in English Literature from Brown University and writes The Austerity Kitchen—where the alimentary is elementary. Her work has been featured by Dissent, Lapham’s Quarterly Roundtable, MAX JOSEPH and Bon Appétit, and she has appeared on Heritage Radio Network’s A Taste of the Past.