We were honoured to be shortlisted for the Taste Canada Culinary Narrative award last night in Toronto at the Arcadian Court. Thank you Taste Canada and to GustoTV and all the sponsors.  Sincere congratulations to category award winners Nick Saul and Andrea Curtis for their book

The Stop: How the Fight for Good Food Transformed a Community and Inspired a Movement

It’s an important story of community innovation for food justice, a pressing local and global issue. Writer Naomi Klein said of it: “The riveting inside story of a food bank that through perseverance and principle turned itself into one of our most visionary movements for justice and equality.”

In Antarctica, you can’t help but think of the food chain, food security and justice, especially with ocean acidification and warming. 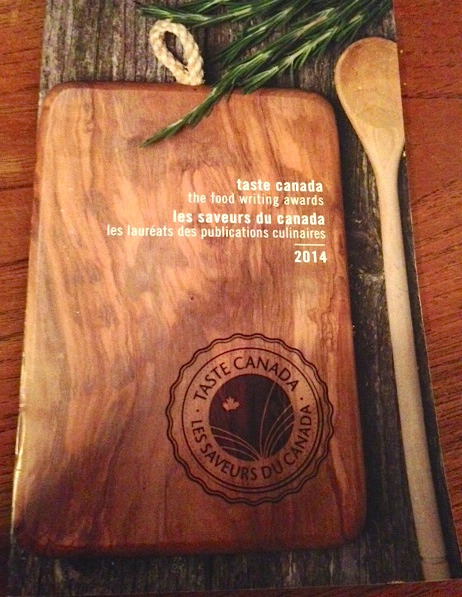 Ricardo was a great host and Karen Gelbart clearly an inspired leader in the Canadian Food world, the outgoing National Chair of Taste Canada. Highlights were hearing about the food and agriculture-related archive and library at University of Guelph (one of the five largest culinary collections in North America)* and meeting Michel Lambert, the 2014 Taste Canada Hall of Fame winner. Michel was born in Saguenay and was for more than 30 years the chef-owner of La mason de la rivière Inn. Félicitations Michel pour voter livre Histoire de la cuisine familial du Québec. Michel spoke about the indigenous and European origins of Québec cuisine, en anglais et en français. 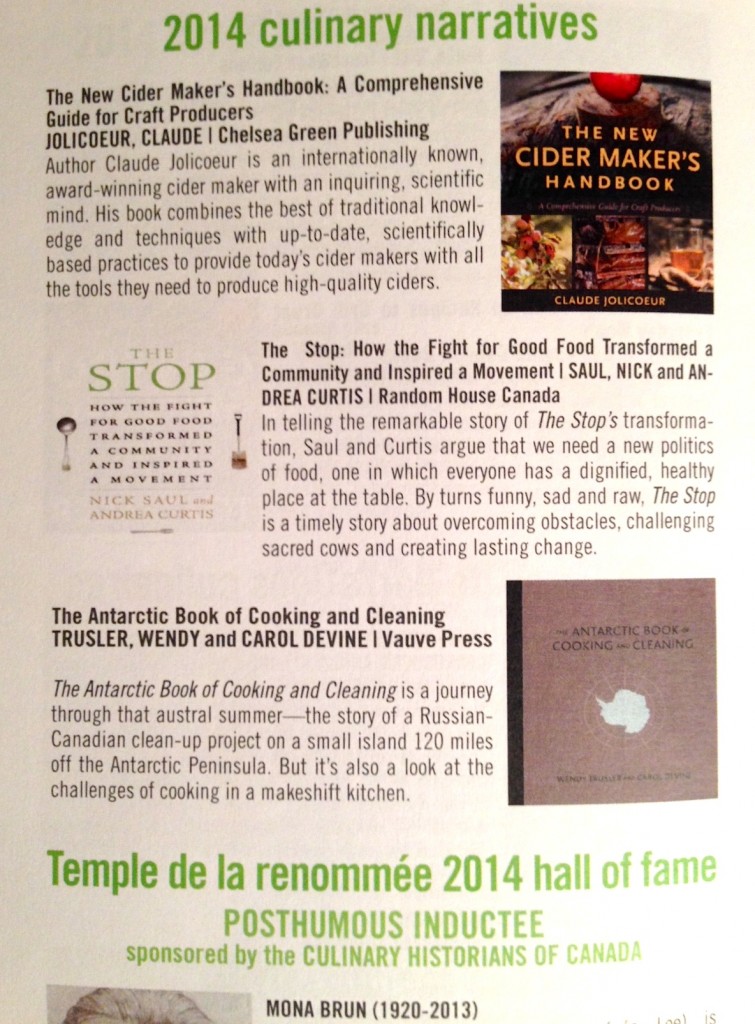 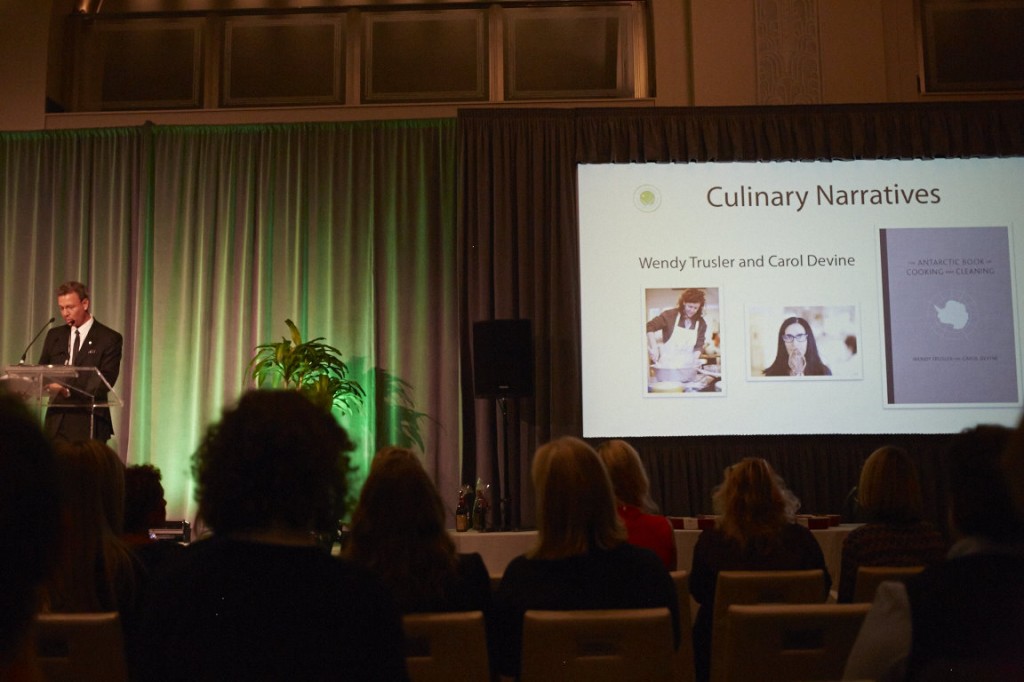 Ricardo reading the nominees for our category

A few other notes on winners, not exhaustive: gourmet bbq’ing Gastro Grilling (of which author Ted Reader said he wrote in his garage in 17 days! Wendy reminded me we met 19 years ago a few days ago at her art opening, Forest Stories, at 401 Richmond St, and our book in effect started then), stumbled-upon pairings (Beppi Crosariol’s surprise pairings while making The Flavour Principle: Enticing Your Senses with Food and Drink with Lucy Waverman), how to use spices Ethné & Philippe de Vienne Les règles d’or des épices (The golden rules of spices), Danny St Pierre’s Dans la cuisine de Danny St Pierre of Auguste Restaurant in Sherbrooke (love the vibrant blue cover) and Jennifer Bain for The Toronto Star Cookbook: More than 150 Diverse and Delicious Recipes Celebrating Ontario. 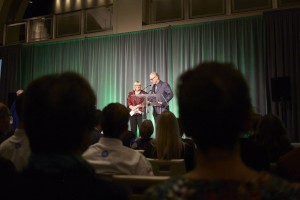 The evening also paid a tribute to The Cookbook Store (1983-2014) opened by Josh Josephson and run by Alison Fryer – to sell only cookbooks. Author Rose Murray, the first author to launch a book there, named other illustrious authors who graced the Yorkville, Toronto store including Julia Child, Anthony Bourdain, Ferran Adria among many Canadian food stars.

It was wonderful to be amongst talented nominees and winners from across Canada and we were thrilled to have made the cut. After the awards our team, supporters and friends headed upstairs with all the guests and enjoyed the beet and chèvre salad, lobster bisque, bbq’d treats, duck on apple, and of course Dufflet pastries as the sweet treat.

Someone amongst our group (Wendy Trusler, her husband Cam Taylor of Nerve Media, our awesome book photographer, Sandy Nicholson, Gilbert Li and Vanda Marasan from The Office of Gilbert Li, our brilliant designer, Danielle Favot Fuze Reps and me) suggested we have a competition to see who could best draw on a napkin, from memory, the shape of the Antarctic continent. All efforts were pretty good but it was Ricardo who joined our table who won, inspired in fact by the appetizer he held in his hand that was, well, Antarctic shaped! 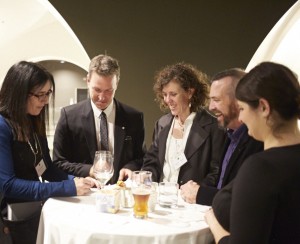 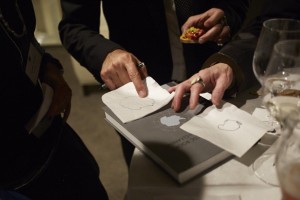 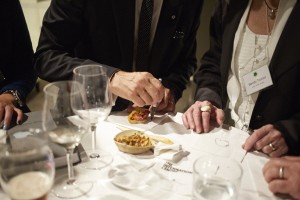 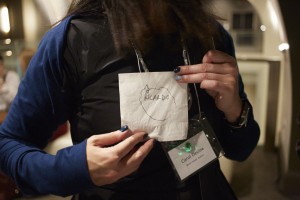 A terrific night to celebrate Canadian cuisine and food-themed contributions, to be grateful for the food we have in Canada and to fête our book and it’s culinary narrative about eating, global citizenship and good neighbourliness, using what you have at the bottom of the world. PS our book – Antarctica and remote cooking –was referenced twice in the introductory words so we hope we continue to contribute to discussions and more great cooking, living, food sharing and the relationships of food to earth stewardship and cooperation. Wendy’s borscht with the twist of maple syrup (one of 42 of her recipes in the book) symbolizes the spirt of our book with its Russian-Canada-Antarctica genesis. 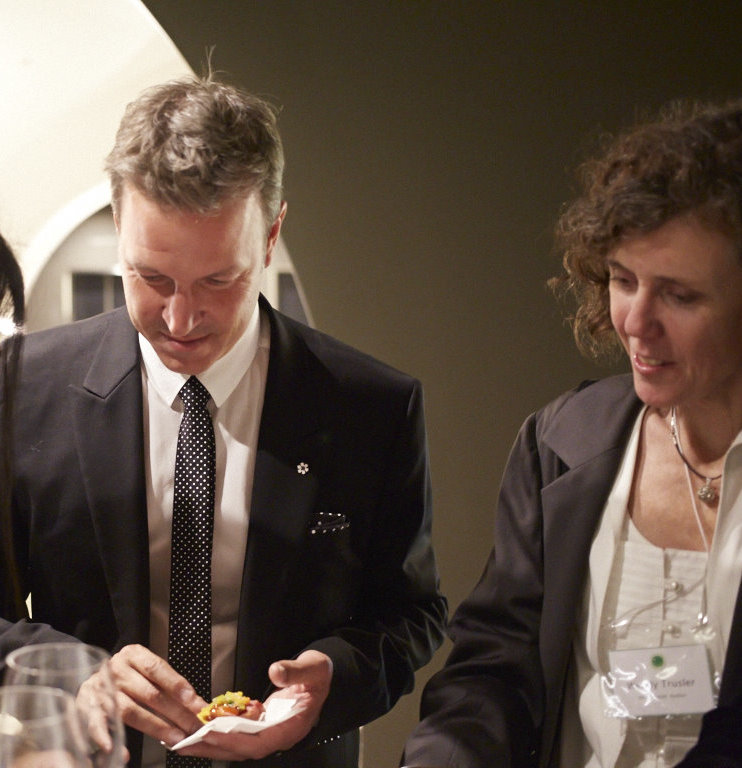 From Taste Canada website: *The University of Guelph has for more than 140 years contributed to Canadian cuisine with programs in agriculture, food science, hospitality and tourism management, and other related fields. The University of Guelph holds Canada’s largest culinary collection with more than 6,000 volumes in the Library’s Archival and Special Collections. One copy of all nominated books will be donated to the University’s Canadian Culinary Book Collection.”

Happy a copy of our limited edition (sold out, HarperDesign publishing in summer 2015) will be in this special library collection in Guelph. 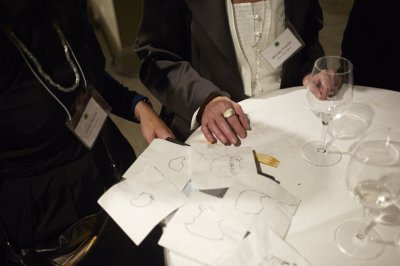 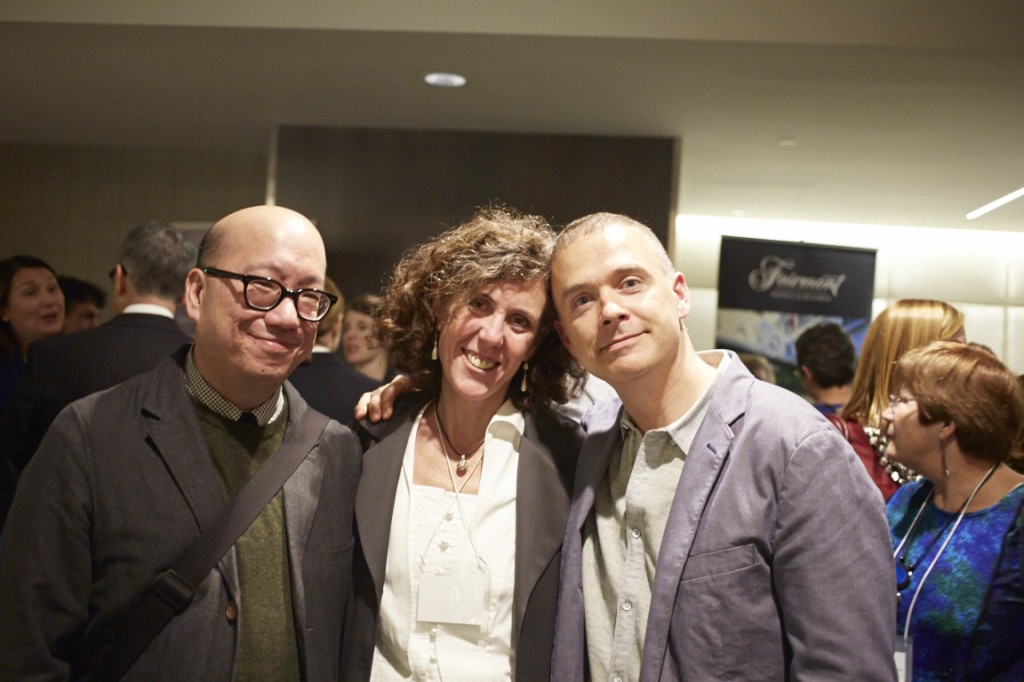 Don’t forget depending where you are in the world, the Antarctic continent may be facing this direction. All photos by Sandy Nicholson (except the one of him by me).

The Book of Antarctic Cooking and Cleaning will be published for worldwide distribution by Harper Design, an imprint of HarperCollins Publishers in May 2015. The book will go on sale on May 5, 2015. To see where to buy it, go to one of the following links.