Déja vu – till when? till there’s nothing left to see?

Larsen B Ice Shelf will collapse by the end of the decade.

“This ice shelf has existed for at least 10,000 years, and soon it will be gone.”– Ala Khazendar, NASA’s Jet Propulsion Laboratory

The news from Antarctica is a depressing –not surprising — and in fact déjà vu like from Greenland. The footage of collapsing and melting ice in Chasing Ice said it all. Antarctica is, feels a living breathing endangered species that is also is being lost alongside other glaciated places worldwide –  far beyond a naturally occurring state of affairs and inevitable change. The implication on sea rise and climate warming are irrefutable. Unlivable locations, malnutrition, migration, severe climate events, conflict etc etc etc.

It’s all predicted, forecast, documented and happening. The NASA tagline today is stark, frank, nothing short of an uber realist reality check. Not apolitical but putting everything there we need to see and act on before us.

“Your planet is changing. We’re on it”

I saw in a NASA social media post someone wrote, not in a pleasant tone, “When did NASA become political?” Unbelievable – NASA (and other satellites) witnesses/documents/records/shares warnings, realities, live action, evidence of hurricanes, forest fires, receding glaciers, iceshelf loss, sea rise, even displaced peoples and earthquake damage. What’s political is the inaction, obfuscation, lying,  denying, ignoring and postponing, not the factual evidence itself. A lethal bystanding.  This is iceshelf  loss – and we know much warming is attributable to human behaviour. The biosphere is breathing; letting us breathe.

“A new NASA study finds the last remaining section of Antarctica’s Larsen B Ice Shelf, which partially collapsed in 2002, is quickly weakening and is likely to disintegrate completely before the end of the decade.

A team led by Ala Khazendar of NASA’s Jet Propulsion Laboratory in Pasadena, California, found the remnant of the Larsen B Ice Shelf is flowing faster, becoming increasingly fragmented and developing large cracks. Two of its tributary glaciers also are flowing faster and thinning rapidly.”

Ode to Antarctica Ode to Larsen B. Reality check. Wake up call. Open eyes and heart. Reaction. Action. We have survived past crises. There’s still so much we can and must do.

Everyone has a voice. Now is  the time to share your voice with our friends, family and political leaders to bring awareness to climate change.

Together, we can share our voices and support our political leaders to take action on climate change.

unsynthesizably dimensional and deeply gratifying in its totality

Maria Popova of Brainpickings wrote this – it means so much to us because we love her work spanning the time-space culture science geographic continuum. She self-describes as a “reader, writer, interestingness hunter-gatherer, and curious mind at large.”

Of The Antarctic Book of Cooking and Cleaning: A Polar Journey Maria writes, “an extraordinary tome blending the enchantment of Thoreau-like journaling (“A brilliant morning. Sun turns berg in bay into gold.”), the fascination of scientific observation and philosophical reflection (“[The Chilean Commandante] said you can’t write about something of which you are not a part. I disagreed, and agreed.”), and the pure delight of delicious, immensely inventive recipes for meals cooked with minimal ingredients and maximal imagination (“sea cabbage salad made with laminaria [fresh kelp]”). 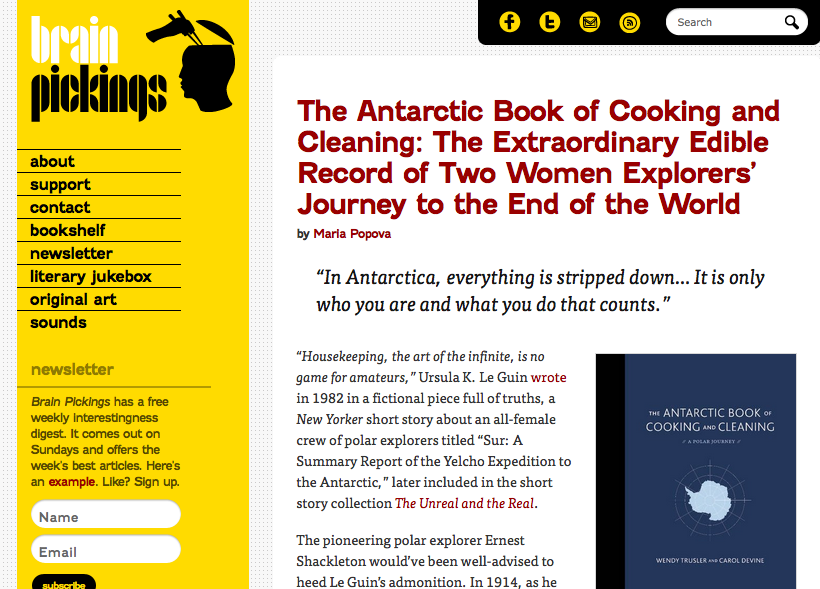 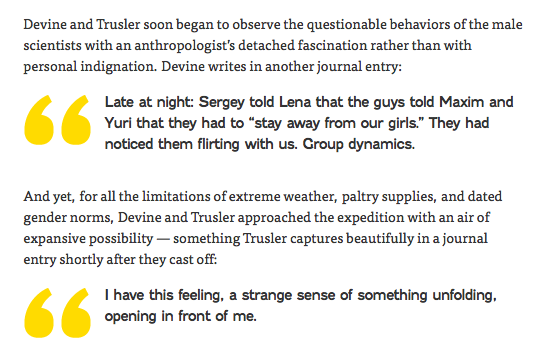