Wisdom from the past for the new year, it could be worse

At the close of the year 1914 things were not going well for the men on the Endurance, their ship got stuck, immobilized in the pack ice in Antarctica and eventually was crushed. They had to move onto the ice for their lives. That’s another bit of the story when they then flee to Elephant Island, miraculously survived off the harshest land and are rescued months later. But now lets go to December 1914. Australian Frank Hurley, a talented photographer and Ernest Shackleton’s Imperial Trans-Antarctic Expedition expedition member, kept a diary. Here are some excerpts. You see the centrality of food and a spirit of endurance.

2015 had its horrors but also many beautiful moments too. A toast to 2016, working together, sharing meals, looking up and keeping our “hoosh [a polar stew] pots clean”.

From Diary of Imperial Trans-Antarctic Expedition 1914-1917

One crab-eater and one Weddell seal secured.

Many sweet memories crowd on me as I lay in my bag, meditation the last day in the year. Home, face, places, and our present position that one cannot altogether regard as sweet. Drifting about on an ice floe, 189 miles from the nearest known land. Still, to apply an old sledging motto, “It might be much worse.”

Inside the hut all are comfortable. Sir Ernest is thinking and solving magic squares. We have plenty of food, and with the coming warm season and subsequent dissipation of the ice, are able to greet with cheery aspect the New Year 1916. New years resolutions. We have none to make as there is nothing to make them for, unless it is be to resolve to keep our hoosh pots cleaner – and faces too!

Land seen faintly to S. E, about 40 miles off. A decisive effort was made to free the ship, all hands continuing till midnight, and everyone, like a Trojan would, wielded a pick, ice chisel or any other implement. …By midnight we had cocoa and wished Sir Ernest many happy returns of his 41st birthday, and all to bunk very tired. 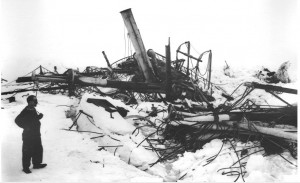 The last of the ship, Frank Hurley

Snow squalls with favouring winds all day. During a clear intermission visited the bergs- game scouting.

Our Blubber supply – the source of fuel – becoming depleted and I being the Nimrod have necessarily to take advantage of every opportunity to maintain the reserve heap.  In scouting amongst loosening pack one must need be both alert and cautious. Skiis are indispensible, cracks 4 and 5 feet have frequently to be crossed and the negotiation of them and brash ice makes one develop a cat like gentleness of tread.  It is astonishing the speed one can travel should a killer happen to poke his head through the thin ice. What curious bosom sensations it excites. Today almost unski-able.

…Raining and sleeting heavily all night confined to tents dripping interior during day. Wind from N.W. and ice very loose, Temp. 33. Invent an exquisite hoosh by mixing our ration of ¼ cake (4 ozs) dog pemmican with a little hot milk and lump of sugar. The taste is greatly enhanced, but more to the point, the bulk is enlarged. By slowly nibbling our midday meal of a 2 oz biscuit and 3 lumps of sugar, we have the mental effect at least of a satisfying repast.

…Heavy snow during night, the landscape assuming a wintry aspect being almost entirely cloaked in snow…..Work during morning on galley; afternoon snare paddies. The past two days we have secured 45 and are looking forward to to-morro’s lunch. The birds are caught by spreading a slip noose near some bait and being extremely greedy walk readily in. Hussey’s and Cheetham’s birthday. Observe 4 Wedells on the pack.

The present condition of the pack will enforce us wintering here. 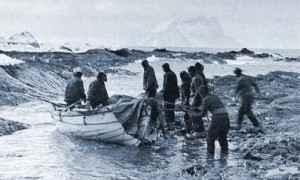