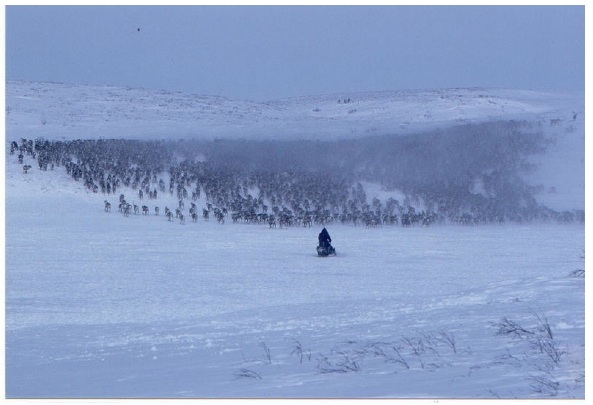 Inuvialuit / Sámi Reindeer Project
Reindeer are not indigenous to Canada, they were brought here in 1935 and the last herd is cared for by The Reindeer People. Whales had been decimated from over-hunting and the idea to bring reindeer came from Alaska, a potential new meat industry. An early example of adaptation, innovation and to a degree, heartbreak and hope.
The Canadian Reindeer Project: Experimenting with Science & Development in Northern Environmental History
“In the early 1900s, the Inuvialuit of the Mackenzie Delta faced desperate times. Depended on caribou meat and fur for thousands of years, they found that herds no longer behaved in a predictable way. With the change in climate, hunters were forced to travel several miles east in search of caribou. In order to stave off famine, the United States and Canadian governments joined together to launch the Alaskan Reindeer Experiment and the Canadian Reindeer project. These programs sought to mitigate the food shortage by importing and herding reindeer from Scandinavia. With the reindeer came the Saami, a reindeer herding culture indigenous to Scandinavia, whose job was to teach the Inuvialuit their successful herding techniques. The Pulk family of Saapmi, Norway and the Binder family of the Canadian Arctic were joined together in both marriage and in the difficult task of introducing reindeer husbandry to a new country. This is the history how it started.” 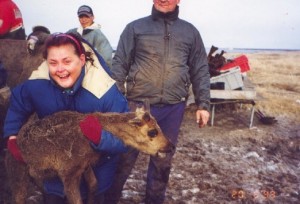 I wish I went to the 75th Anniversary party, that’d be a fantastic political and cultural history and cookbook.

The Inuvialuit Regional Corporation (IRC) and Canadian Reindeer will jointly celebrate the successful 1935 arrival of the reindeer herd to the Mackenzie Delta with a festive day event at Swimming Point on Richards Island.

An open invitation is extended for visitors to drive the ice road on April 6th to Swimming Point to observe the noon herd crossing of the ice road to the summer range on Richards Island. Traditional foods will be available at a festive meal in Inuvik later in the evening…

The herd migration and river crossing normally occurs before April 9th, when the pregnant females usually begin to give birth to their young.

From Maisonneuve story, The Curse of the Deer in 2009. “Reindeer are not indigenous to Canada but thrive wherever caribou do. They belong to the same deer species but form a different subspecies, distinguishable by shorter legs, heavier rumps and white spots. Reindeer are more sedentary and can become quite comfortable around people, making them ideal candidates for animal husbandry – which the Sami have practiced for centuries. In the circumpolar Arctic there are an estimated 1.4-million domesticated reindeer, the majority of which range in Russia. In Alaska, their numbers once hit 640,000 but now have shrunk to 30,000, with 20 dedicated herders.”

Thanks to Cold United for the story tip.