Friends in New York City, join us for a unique dinner event

One of the biggest events in the Antarctic calendar is Midwinter which celebrates the halfway point in the long polar night.

Our Antarctic Midwinter Dinner event on March 30, 2014 is the New York launch of our food and cultural history book, The Antarctic Book of Cooking and Cleaning. We’re pairing with the beautiful East Pole restaurant (133 E 65th St) in their map room, sharing our love of the Antarctic and delicious sustainable food. Includes cocktails, three-course meal with Antarctic flavours by fabulous chef Nicholas Wilber and a few readings. We will toast the power of food to unite people and pay tribute to the continent’s ecological significance. Tickets: $140 per person includes a limited edition book, meal, wine, tip and tax. 10% of the ticket price will be donated to the Antarctic Southern Ocean Coalition (ASOC)  and that portion is tax deductible in the U.S. For more information or tickets (only a few remain): carol@theantarcticbookofcookingandcleaning.com +416 567-3936

The Antarctic Book of Cooking and Cleaning is a journey through one austral summer—the story of an environmental cleanup project by Carol Devine and Wendy Trusler at a Russian scientific station on a small island off the Antarctic coast. The book is also a look at the challenges of cooking in a makeshift kitchen at the bottom of the world.

It features 42 recipes developed by visual artist and cook Wendy Trusler while feeding volunteers on a remote continent uniquely devoted to peace, international cooperation and science. In a polar journal style, woven throughout are historic and contemporary images, food stories, recipes, journal excerpts and vignettes from Antarctica’s short history and this joint Russian-Canadian cleanup project. 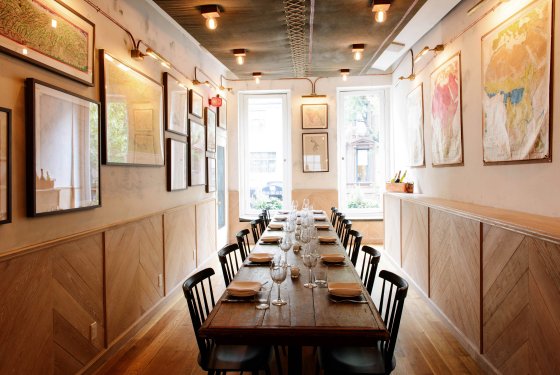 March 30th is not Antarctic midwinter in the Northern Hemisphere but it is Spring Equinox time here. That means it is also an opportunity to get together and share a meal to celebrate what has been in North America an astonishingly wintry winter thanks to the Polar Vortex from the Arctic and other ‘weather events’, a likely new reality across the world.

In early Antarctica expeditions many midwinter meals were a big celebration in June. Food was an obsession and this was the time to get out the finest existing amongst your provisions. The images from those times at the turn of the century show much food and bottles on the table. When possible, the Midwinter Dinner menus at times were extravagant, by Antarctic standards.  Here are a few quotes from Midwinter dinners we collected while making this book.  We’d even thought of how to adapt the Australasian Midwinter dinner for day (ocean-friendly fish and sans penguin eggs and who could find a turn of the century claret anyways). Frank Hurley photographed these elaborate, illustrated beautiful 1912 Midwinter menus. Thank you State Library of New South Wales for the images. 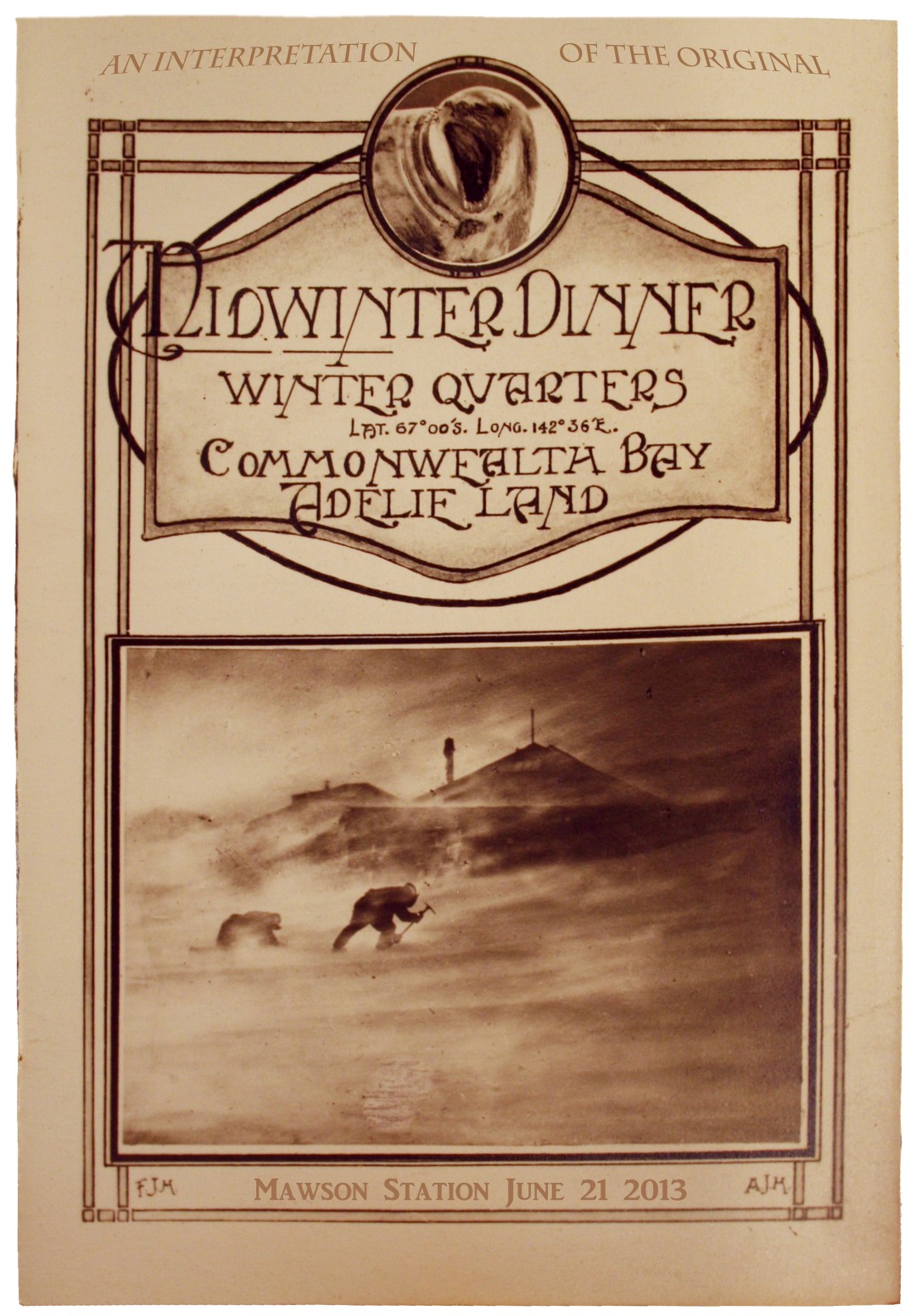 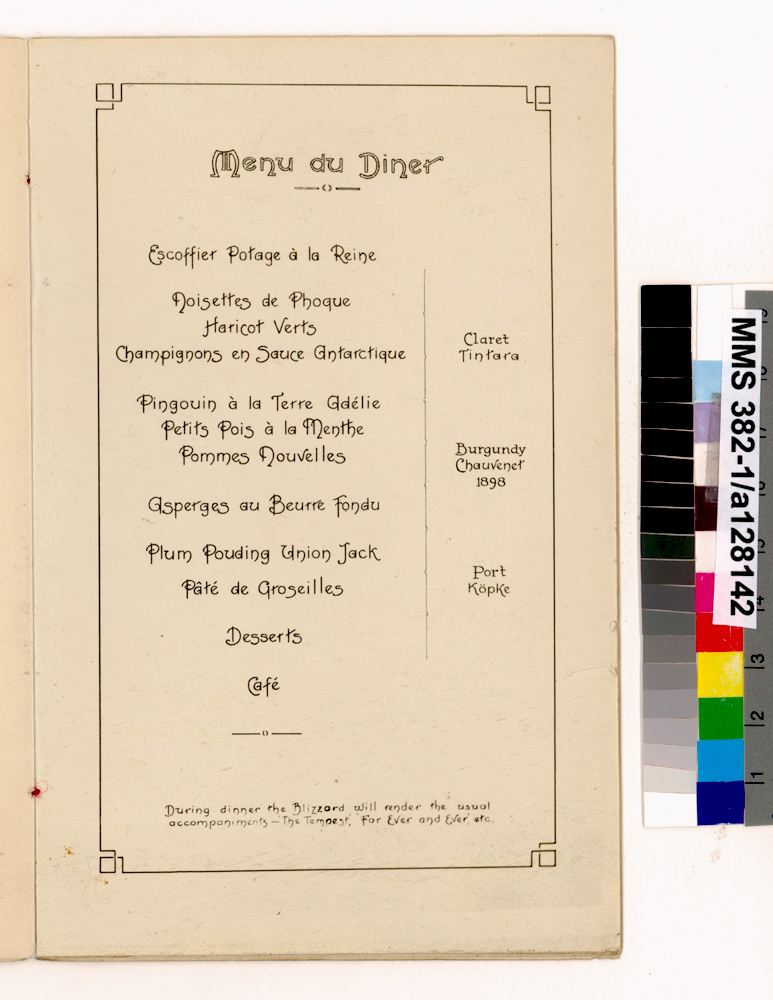 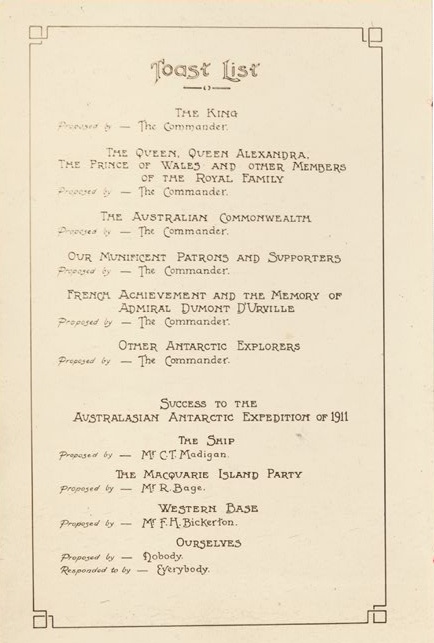 For fun here is how we at The Antarctic Book of Cooking and Cleaning thought one could remake the original menu (not the menu for Mar 30th!) 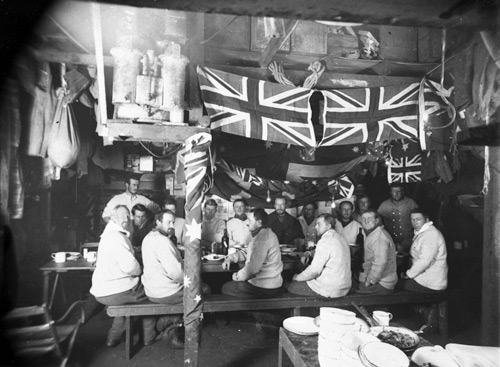 “The history of the midwinter celebration stretches back as far as Neolithic times. For example, ancient archeological sites such as Stonehenge and New Grange appear aligned with the solar solstice. Midwinter festivals developed feast celebrations as people consumed the last of the fresh food and meat before the deep winter began.

Midwinter festivals may also have developed as therapeutic events for cultures dealing with the darkness of the season. Traditional celebrations involved large fires, illumination, dancing and singing — perhaps winter therapies to combat the malaise brought on by long periods of cold and dark.

Midwinter in Antarctica is perhaps the most international of holidays, celebrated equally by people of all nationalities at every station in Antarctica, regardless of politics, national views or religion. Across the continent, messages of greeting and goodwill are sent via e-mail to everyone celebrating the special day. No doubt, many blog about the event to friends, family and readers back home.

A century before the digital age, the early explorers kept meticulous records of their expeditions in diaries, including midwinter celebrations.

Pretty much everyone writes about the food. While Antarctic living has come a long way from cold, unheated huts and ship cabins, the ability to store food over these long months is still very much the same. Both then and now, the residents of the Antarctic winter survive mostly on canned or frozen meats and vegetables, with little in the way of variety. The Midwinter Dinner has always been a welcome break from the monotony and bleakness of the daily menu. In every journal, blog and diary, there is always a lengthy passage describing the meal in great detail.” 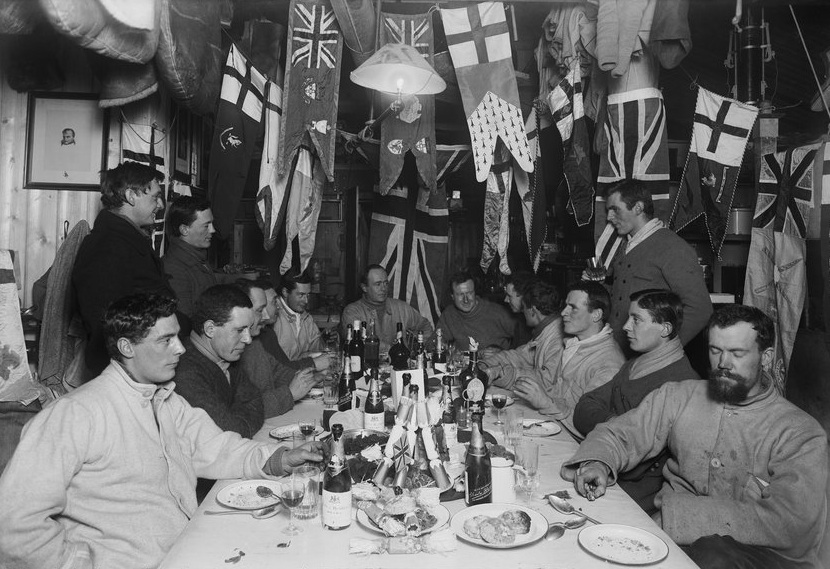 “The sun reached its maximum depression at about 2.30 P.M. on the 22nd, Greenwich Mean Time: this is 2.30 A.M. on the 23rd according to the local time of the 180th meridian which we are keeping. Dinner to-night is therefore the meal which is nearest the sun’s critical change of course, and has been observed with all the festivity customary at Xmas at home.

At tea we broached an enormous Buzzard cake, with much gratitude to its provider, Cherry-Garrard. In preparation for the evening our ‘Union Jacks’ and sledge flags were hung about the large table, which itself was laid with glass and a plentiful supply of champagne bottles instead of the customary mugs and enamel lime juice jugs. At seven o’clock we sat down to an extravagant bill of fare as compared with our usual simple diet.

Beginning on seal soup, by common consent the best decoction that our cook produces, we went on to roast beef with Yorkshire pudding, fried potatoes and Brussels sprouts. Then followed a flaming plum-pudding and excellent mince pies, and thereafter a dainty savoury of anchovy and cod’s roe. A wondrous attractive meal even in so far as judged by our simple lights, but with its garnishments a positive feast, for withal the table was strewn with dishes of burnt almonds, crystallised fruits, chocolates and such toothsome kickshaws, whilst the unstinted supply of champagne which accompanied the courses was succeeded by a noble array of liqueur bottles from which choice could be made in the drinking of toasts.

I screwed myself up to a little speech which drew attention to the nature of the celebration as a half-way mark not only in our winter but in the plans of the Expedition as originally published. (I fear there are some who don’t realise how rapidly time passes and who have barely begun work which by this time ought to be in full swing.)

We had come through a summer season and half a winter,and had before us half a winter and a second summer. We ought to know how we stood in every respect; we did know how we stood in regard to stores and transport, and I especially thanked the officer in charge of stores and the custodians of the animals. I said that as regards the future, chance must play a part, but that experience showed me that it would have been impossible to have chosen people more fitted to support me in the enterprise to the South than those who were to start in that direction in the spring. I thanked them all for having put their shoulders to the wheel and given me this confidence.

We drank to the Success of the Expedition.”

Scott and the South Pole team unfortunately did not return home and perished only a short distance from a food cache.

“We are half-way through our long winter. The sun is circling at its lowest; each day will bring it nearer our horizon. The night is at its blackest; each day will lengthen the pale noon twilight. Until now, the black shadow has been descending on us; after this, day by day, it will rise until the great orb looms above our northern horizon to guide our footsteps over the great trackless wastes of snow. If the light-hearted scenes of to-day can end the first period of our captivity, what room for doubt is there that we shall triumphantly weather the whole term with the same general happiness and contentment?”

Cheers to all this nearly End of Winter March wherever you are North or Southern Hemisphere.