The coldest and most remote tea party ever

An intriguing expedition Antony Jinman is soon leading is the Arctic Jubilee Tea Party. He is a British Polar Explorer, Public Speaker and the director of Education Through Expeditions and we met at the International Polar Year Conference in Montreal on Tuesday at our book club talk. 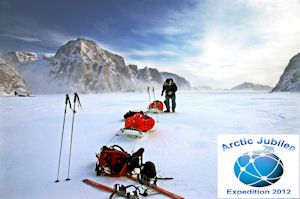 For the Diamond Jubilee in June, Antony is traveling with two young Canadians and six adventurers from Plymouth in June to the highest point on the Queen Elizabeth Islands in Canadian Arctic.  It’s a fundraiser too for families in Plymouth dealing with loss. Antony suggested that Wendy, a former cook for treeplanters in Canada’s north and for volunteers and scientists in the Antarctic, might have suggestions of what to have at the tea party, besides cake: something British, something local.  Wendy said cucumber sandwiches would suit but wouldn’t travel well.  She proposed scones with currants. The Arctic tea party with cake or scones will be a feat, but as we commiserated, (almost) anything is possible. Very cool idea for an alternative meaningful and collaborative Diamond Jubilee (Queen Elizabeth’s 60 years on the throne celebration, if you don’t know).

We had a lot of tea in Antarctica with the Russians, the seasonal inhabitants of the southern continent. There are extremely few people (less than 400) on this high north Arctic Archipelago so the tea party will be cozy.  There are also a few seasonal researchers living on these islands including those of Global Atmosphere Watch (GAW), part of the World Meterological Organization, a “partnership involving 80 countries that provides reliable scientific data and information on the chemical composition of the atmosphere, its natural and anthropogenic change, and helps to improve the understanding of interactions between the atmosphere, the oceans and the biosphere.”