British Airways magazine High Life featurette on The Antarctic Book of Cooking and Cleaning by Bella Bathurst, June 2014. Thank you British friends and world travellers for your interest in the book after you saw this piece in the air!

In the century since Shackleton and his crew returned, polar cuisine has improved. Wendy Trusler and Carol Devine’s account of leading a Canadian expedition to clear the area of waste around a Russian base in the mid-1990s is nourishing in all sorts of ways. Not just for the sumptuous recipes they include — good enough to make one take up litter-picking or penguin-counting just to fit them all in — but for the day-to-day detail of deep-frozen existence. Antarctica is the world compressed; 30 separate countries have bases there, and Trusler spent much of her time cooking up an entente between China, Russia and her league of volunteering nations.

What’s lovely about these recipes is not their rarity (chocolate chip cookies, asparagus pâté) but the stories that go with them and the value of their connections. This is cooking at its best: food with history, icebreaking bread. 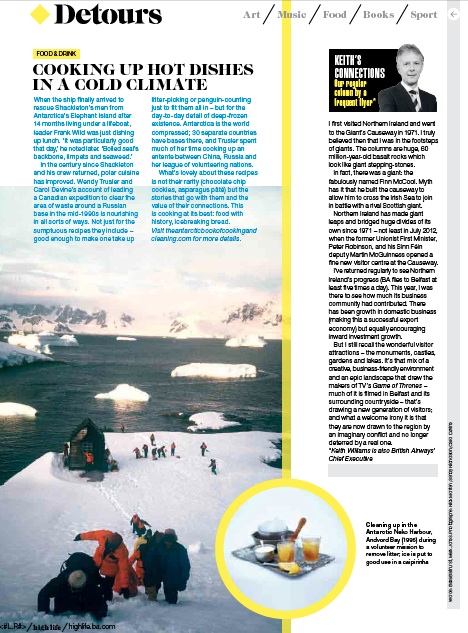