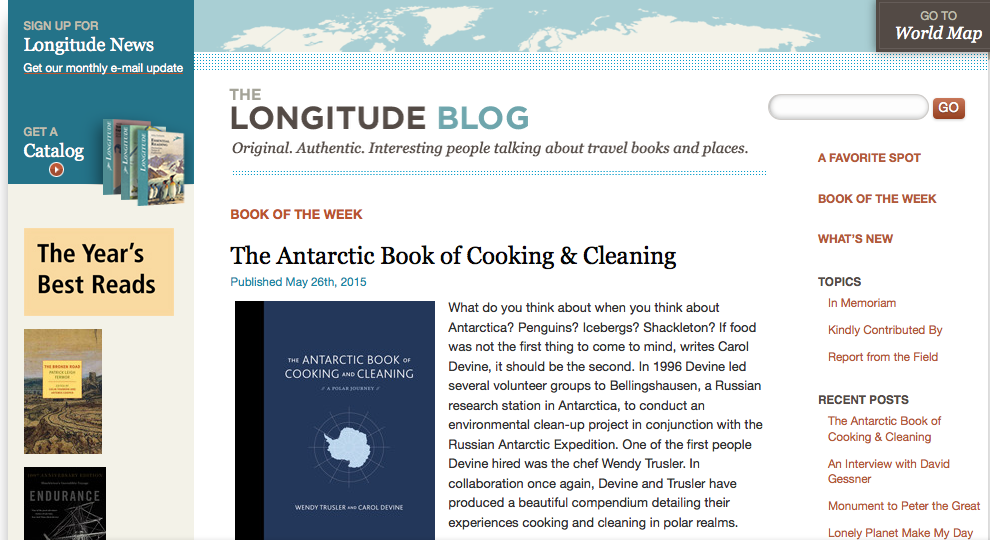 www.longitudebooks.com Book of The Week

The Antarctic Book of Cooking and Cleaning is designed in the style of historical Antarctic publications, such as Ernest Shackleton’s handmade Aurora Australis. It’s a miscellany of packing lists and plans, menus, journals, recipes, letters and photographs that give the reader a full understanding of what it was like not only to plan and execute an expedition of 50 plus volunteers in harsh conditions – but also to feed them.

The fact that cooking and cleaning have historically been seen as a woman’s responsibility while the uncharted Antarctic was deemed a man’s domain makes for an interesting intersection of gender roles and expectations. Just as the borders between nations are easily crossed on the Antarctic continent (the women navigate between Russian, Chinese and Chilean bases), the boundaries of gender roles are also blurred, stretched and explored…

In Ursula Le Guin’s fictional story “Sur,” published in The New Yorker in 1982, eight women travel to the South Pole. Though they are the first humans to reach it, they don’t publish their journals. Though they lose their toes, they are happy to leave no footprints. And when the narrator finds the mess Captain Robert Falcon Scott’s expedition left at base camp she declares: “Housekeeping, the art of the infinite, is no game for amateurs.”

If housekeeping is the art of the infinite, where better to practice it than in a place that embodies the infinite. And how better to protect seemingly endless stretches of landscape than to pick up trash or cook a meal? As Trusler writes, “whether we are taking care of each other or taking care of the land, small gestures matter…There is wisdom to be gleaned from sound housekeeping practices.”